Welcome to the free information sessions about the production. Representation advises doctors. To register for the lecture or consultation, please call tel. +370607 77169 or e-mail us info@kordicepsfeniks.lt (private consultation costs 12 Eur.) 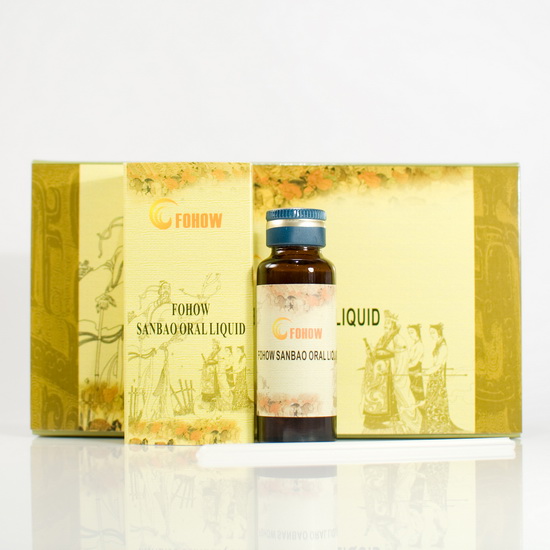 It is the most important preparation in China – biological immunoregulators developed in the scientific research institute of corporation “Fohow”. It is used just as oral liquid “Phoenix”. “Sanbao” has a much better effect in the cases of hepatitis B and C, rheumatoid polyarthritis, diabetes.

Oral liquid “Sanbao” is developed on the basis of the oral liquid “Phoenix”, having added the newest industrial substance – Mountain ant, Polyrhachis vicina (Pv Roger) extract. In every bottle of the final product there is approximately 300-307 of ant extract. When producing the preparation, ants were inactivated by freezing, and besides, in order to split the cell membranes, subnanometric technologies and crioextraction was used, this enabled to use up to 98% of the valuable initial substance (Mountain ants).
Biologically active food supplement oral liquid “Sanbao” is similar in its content to oral liquid “Phoenix”, but Cordyceps concentration in it is larger and reaches 80%. The preparation, unlike oral liquid “Phoenix”, is characterized by a better expectoration effect, reduces bronchial obstruction and improves blood circulation in the respiratory system and lower pelvis organs, normalizes the function of the urogenital system organs, regulates the amount of cholesterol in the blood.

Oral liquid “Sanbao” is prescribed in the same doses and courses as oral liquid “Phoenix”. For children as a preventive measure oral liquid “Phoenix” is usually prescribed.
Rheumatoid polyarthritis and other joint diseases – at least 4 months.
Hepatitis B and C – for several months.
Diabetes (especially Type 2) – 2-3 months.
Respiratory organ diseases: bronchitis, especially chronic, pneumonia, lung emphysema, bronchial asthma – beginning with one month up to 3 months. In the cases of lung tuberculosis the course is longer.
Rhinitis, sinusitis, otitis – dripping a few drops into an ear or nose twice a day until the symptoms disappear.
Also, one should take the preparation from several weeks to several months in the cases of all urogenital diseases, especially of men, prostate hypertrophy and adenoma, reduces potency, spermatorrhea, premature ejaculation; for women – nycturia, menstruation cycle disorders, pains in the pelvis area – for several months.
Pre cancer diseases and malignant tumors – 3 months.
Oncological diseases – constantly (given a positive changes the dose should be reduced till preventive).
Increased amount of lipids, cholesterol and triglyceride in the blood – no less than 2 months, or until a normal laboratory analysis result is achieved.
Many other chronic diseases, when preparation oral liquid “Phoenix” can be used, too – courses from a couple of weeks up to 4 months.
Doses for adults
Minimal curative dose of oral liquid “Phoenix” and “Sanbao” is 5ml a day. If it is necessary the preparation dose can be increased up to 2 bottles (60ml) a day (in such cases the preparation is usually taken twice a day – in the morning and evening). One should pay attention to the fact, that a preparation dose has to be increased gradually, in the order to avoid possible exacerbation and when traditional meditation is used.
Remarks
For adults who suffer from respiratory diseases, bronchial obstructions, the preparation dose is increased from 2ml by 1ml every day, until a clinical effect is achieved, that is, suffocation is reduced, expectoration is increased. The appointed preparation doses are used up to two months.
For teenagers oral liquid “Sanbao” should be prescribed very carefully, because it stimulates urine and sexual system blood circulation.
In the cases of oncological and hematological diseases it is recommended to take liquid Cordyceps forms in turns or take oral liquid “Phoenix” and “Sanbao” simultaneously. In the cases of endocrinal and urogenital system, encephalon oncological diseases one could also take “Linchzhi” capsules.
Functions and Effects
Resistance of rheumatism and rheumatoid arthritis:
It can adjust the immunologic function of the body without the side effect of immune suppressor. Through immune regulation, the oral liquid enhances the functions of immune organs such as thymus and spleen, increases the number of leucocyte, lowers the rate of sedimentation of erythrocyte and promotes the negative conversion of rheumatoid factor so as to reduce the generation of auto-antibody and its destroy of cells. In addition, this product also plays a vital role in stimulating hemopoietic function to ameliorate patients’ anemia condition and especially in the assistance of balance between T cells and suppressor T cells.
Good effects for hepatitis B:
It can offer adjutant therapy and protection to the patients who have hepatitis B and surface anti-yang. With the addition of the traditional Chinese medicine which can eliminate dampness and expel blood stasis, it can regulate the flow of vital energy and soothe the liver, reinforce the spleen and promote digestion and so on, this product can recuperate patients’ health in a short time, get rid of the virus and refresh the damaged hepatocyles.
Special effect on diabetes:
This product has the functions that have good effects on diabetes such as enhancing immune system, regulating endocrine to accelerate glycometabolism, promoting the functions of islet cells β, increasing the reactivity of insulin and inhibiting the produce of insulin antibody. What’s more, this product can activate insulinogen to transform into insulin to control and change the symptom of diabetes.
Promotion in the development of thymic:
It can strengthen people of immunity and resistance capabilities, promote the development of immune organs like thymus and spleen so that people can bloom the spirit again.
Removal of the severe side effect caused by chemotherapy:
It can improve the reactivity of macrophage and lymphocyte to increase the number of leucocyte in the blood, remarkably lessening the severe side effect of radiation treatment and chemotherapy.
Good effects in exhibiting preferable effect on the kidney and strengthening the Yang:
Fohow Sanbao oral liquid has the function of nourishing the essence, supplying the air and increasing mental alertness. Through the nourishing of essence and air supply, it realizes the effects of tonifying the kidney and strengthening the Yang.